We are pleased to be officiating and organising the Air element of the Grand Opening of the International Bomber Command Memorial on the 12th April. For a number of years the project has been gaining momentum and raising the vital funds to build a fitting monument and visitors centre to commemorate the work of Bomber Command, in the heart of Bomber County itself.

From its prominent position on Canwick Hill, the monument, which symbolises a Wing of the famous Avro Lancaster, overlooks the city of Lincoln, facing North towards the counties other significant structure; Lincoln Cathedral.  The IBCC features its centrepiece monument, the Spire is now recognised as the tallest war memorial in the UK and is surrounded by 270 Steel walls, containing the names of the 58,000 members of Bomber Command who made the ultimate sacrifice.

The Chadwick Centre, named after Roy Chadwick designer of the Avro Lancaster, houses interactive displays, providing a history of Bomber command, through various displays both permanent and temporary. In addition it also plays host to a research and reference library and a cafe and Gift Shop.

The grounds also contain 2 peace gardens providing a a peaceful contemplative space for visitors. The Lincolnshire Peace Garden, planted with 27 native trees, symbolising the 27 operational Bomber Command bases in the county during WW2.  The International Peace garden pays tribute to the 62 nations who served or supported Bomber Command during the period, with an IBCC App, to help you discover more about some of the lesser known efforts of our allies.

The IBCC also reflects on the plight of those who suffered from the bombing campaigns and also the humanitarian work of Bomber Command. This is truly a place for all and will be a fitting memorial to all those who gave and lost their lives, those who survived and all those who have a story to tell.

We are hugely honoured and proud to be involved in the opening of this truly international memorial.

The official opening on the 12th April 2018 is by invitation only and will feature a number of flypasts by vintage aircraft and current military aircraft. Traffic restrictions will be in force on the local road networks and will be patrolled by Police.  The IBCC opens to the public fully on the 14th April 2018. For more information please visit www.internationalbcc.co.uk/ 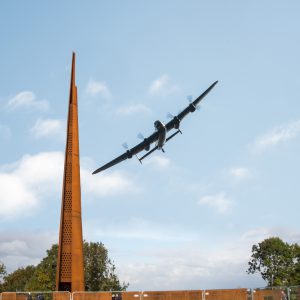